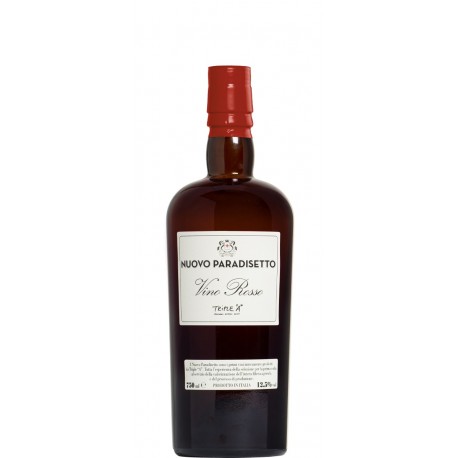 Average age of the vineyard:  20 years

Vinification and aging: Maceration on the skins for 5 days, spontaneous fermentation in stainless steel tanks and aging in the same containers.

The Avant-garde Nuovo Paradisetto Rosso is a fresh, light and Mediterranean red wine. A grape juice that moves agile in the mouth between delicate aromas, between softness and salt, between lightness of tannin and ease of drinking. A glou glou wine, but with character and personality, mirror of the territory.

In summer or winter, with family or friends, during a meal or as an aperitif, the Nuovo Paradisetto Rosso is the versatility made in the bottle. A wine for all occasions, but never banal.

Nuovo Paradisetto is the first wine range created by the Triple “A” team. Our selection experience
and know-how were used to valorise the entire agricultural chain and wine production process.
The name comes from the beautiful Velier headquarters in Genoa, named “Villa Nuovo
Paradisetto” by Luca Gargano, in reference to the former offices that were located inVillaParadisetto. Inacompleterupturewiththeglobal standardisation of wine, NuovoParadisetto establishes a strong and appropriate relationship between the winemaker, thevineyardandthe terroir andisbasedabove all on aproductionphilosophy that excludes any chemical
intervention either in the vineyard or in the cellar. TheideaistomakeNuovoParadisettoanintroduction
to the Triple “A” world. Accessible, fresh, easy-drinking, juicy and fruity: these two wines are truly
thearchetypeof the Italianwine toshareatthe table.
Luca Gargano, Velier’s owner, is a great wine lover, and has been distributing wines from all over the world in Italy for four decades. In the early 2000s, he began to question the production methods used by many winemakers.
The lack of transparency on the use of chemical products and selected yeasts, but also the growing
standardisation of wines led him to create, in 2001, the Triple “A” wine manifesto, in reference to the three “professions” he believes any winemaker committed to producing true terroir wines should master: “Agricoltori, Artigiani e Artisti” (Farmer, Artisan and Artist).
The philosophy common to all Triple “A” producers embraces an approach that does not use filtration, synthetic products in the vineyards and additives during vinification, and also respect the vine’s natural cycles as well as the systematic use of indigenous yeasts.
Since the beginning of the movement, Velier has only been distributing Italian and international
wines made by Triple “A” winemakers. This has led Luca Gargano and Fabio Luglio, the Triple “A” wine expert from Velier, to go further by producing their own wines.
The two expressions that inaugurate this range are like those of the Triple “A” movement, accessible to both newcomers and experts: a white wine from Friuli, made from five grape varieties, and a red wine produced in Liguria, made mainly from Alicante.

Most of the wines produced in the world today are standardised, i.e. obtained using agronomic
and oenological techniques that kill the mark of the grape variety, the impact of the terroir and
the personality of the producer. Standardisation produces identical wines from all over the world,
with flattened organoleptic characteristics that are unable to defy time. The use of chemicals in the
vineyard and the use of laboratory-selected yeasts are the two main causes of this standardisation.
Great wines, wines that convey emotion, are the result of almost no agricultural work and the least
interventionist winemaking possible. The Triple “A” manifestobrings together the fundamental selection criteria shared by winemakers who are committed to an approach that respects both the environment and people.
For the firsttime,this philosophy is carried through Nuovo Paradisetto, the first wine range elaborated by the Triple “A” team.